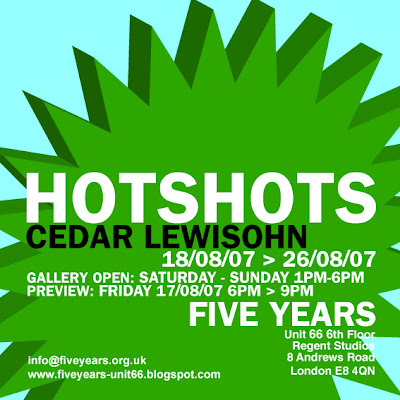 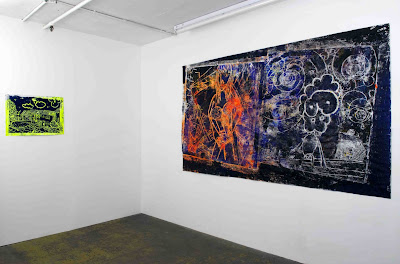 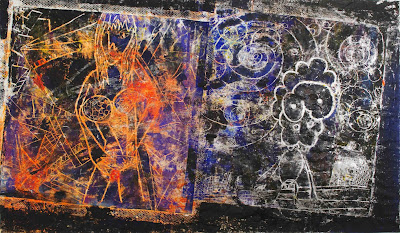 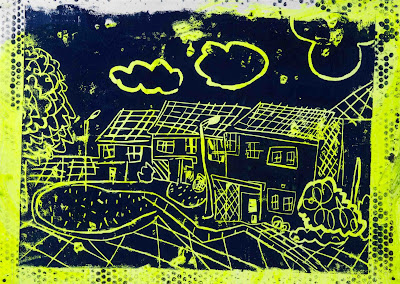 In the novel Hotel Honolulu, author Paul Theroux invents a fictional character called Paul Theroux who charts the lives and fleeting whims of the many characters who amble past him as he works as the manager of a low rent dive in the sun. Sleazy and corrupt, the people he meets and becomes one of seem to be more attractive as they become more hideous.

In much the same way, Cedar Lewisohn's new work at Five Years blurs the boundaries of fiction and reality adding a mild sense of depravity to the mix. Drawing inspiration and its title from a bowling alley and "Ned Disco" in Glasgow where the artist worked for a time, HOTSHOTS offers a glimpse into the nocturnal world of the drunken masses. It's not pretty and there lays its beauty. If the art in this exhibition could speak, it might well quote Paul Theroux's Hotel Honolulu boss, Buddy, with perhaps his wisest and most profound catch phrase "never jack off a dog".
Posted by five years at 8:16 AM

Hi there my name is John Brown

I am currently writing a research paper entitled “The products of critique: What can artist run initiatives in contemporary London hope to achieve from questioning the modes of the institution?” I was directed to this blog by Phil Griffin (tutor at Kingston University school of Fine Art) He said that he had spoken to Edward Dorrian at Five years gallery, and that if I wanted to direct questions to the gallery then to do so through this blog.

I am primarily interested to find out what drove you to open the Five years gallery. I understand from your website that the gallery aims to create a working environment where the relationship between Fine art practice and Curating can be considered and scrutinised. Have your experiences as working artists informed this want to look into this relationship, and if so how?

John,
this blog's been on a bit of a holiday for the past few weeks so sorry for the slow response. We will be updating on Thursday evening - hopefully there will be some responses over the next few days with different perspectives on your question from Five Years members.
If you like you can re-publish your comment under the most recent post once we've updated, or we can continue the discussion here.
Thanks for getting in touch