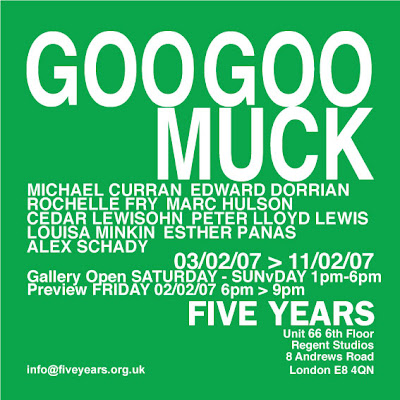 On 2nd February Five Years launched a new gallery space with the exhibition Goo Goo Muck. This is the first time we have had a home for our projects since the closure of our Underwood Street space in 2002. The aim of this blog is both to document shows and events at the new space and to invite comments, commentaries, discussion, critique... both in response to our projects and around related subjects, interests etc.
Posted by five years at 1:03 PM No comments:

Posted by five years at 1:00 PM No comments:

In February 2000 the exhibition Dark Pop at Five Years set out to explore "the current - apparently inexorable and escalating - seepage of so much of the creative detritus once deemed underground, cult or trash into the virtual mainstream of popular culture.". More than half a decade later the relationship between underground and mainstream in popular culture has moved on - from a mutual collapsing or disintegration of boundaries to something like universal meltdown.

Today the visible layer not only of popular culture but of mainstream political thought and conscious reality appear to be in the grip of the simplistically dark substructures of pulp fiction. We inhabit a world of monstrous, grotesque exaggeration. Conspiracy theories abound on all sides - sinister politicians are engaged in a conflict which no-one understands with a villainous, alien other; the gung-ho rhetoric of battle co-exists queasily with tales of prison camp home-porn videos; everything comes soaked in blood. In the sphere of entertainment the resurrected Dr Who recently made an ironic nod to 9/11 with a prime time story of slimy green extra-terrestrials flying a spacecraft into Big Ben, in a failed attempt to kick start an interplanetary war on terror.

Goo Goo Muck sets out to explore the sludge or slurry of signification predicated in the above. As a framework for this exploration we will consider the cultural significance and aesthetic deployment of the colour green: not from the perspective of it's traditional association with the pastoral, or with any idealised notion of the natural, but from the opposite point of view - in terms of green's use in pop-cultural vernacular as signifier of the base, the repulsive, the amorphous or alien. All work selected or produced for the exhibition will place emphasis on the use of green as a chromatic signifier in these terms.

The title of the exhibition is taken from a song by avant-trash rock icons The Cramps. As Jonathan David White puts it: "In the American night of this song, sunset precipitates a lycanthropic transformation into a being whose name suggests at once a 1950s B-movie monster, something like The Blob, and a kind of personified semen appropriate to the verbal conjunction of oral sex with "primitive" and murderous headhunting."1

Oh, when the sun goes down and the moon comes up
I turn into a teenage Goo Goo Muck . . .
Yeah, I'm the night head hunter looking for some head
With a way-out body underneath that head.
You better duck, when I come up... Goo Goo Muck
("Goo Goo Muck") 2

The song's lyrics do indeed suggest both an ode to low budget 50s teen-horror movies and a thinly veiled series of allusions to the hormonic 'mess' of adolescent sexual urges. In this sense it simply mirrors the lurid associations between monstrosity and sexuality already proposed by cult items like I Was a Teenage Werewolf. But as fictions, the monster movies of the 50s and early 60s also served to mythologise the paranoiac post H-bomb conflict of the Cold War; specifically to give shape to shadowy, amorphous threats from outside. Thus in choosing to identify with a virtually formless monster (The Blob as opposed to the more anthropomorphic Werewolf or Vampire), and linking it directly with messy ejaculation, Goo Goo Muck's lyrics set off a further chain of allusions which inform the thinking behind the exhibition.

In his entry for the Surrealist "Critical Dictionary", Georges Bataille famously predicated the notion of L'informe, the Formless (an idea extensively referenced and theorised by Rosalind Krauss in her critical and curatorial projects):

"...formless is not only an adjective having a given meaning, but a term that serves to bring things down in the world, generally requiring that each thing have its form... affirming that the universe resembles nothing and is only formless amounts to saying that the universe is something like a spider or spit." 3

In setting up a knowingly crude, pop-oriented take on Bataille's and Krauss's philosophical propositions, Goo Goo Muck reflects the high / low, underground / mainstream meltdown it aims to address: a set of complex ideas rendered as a cartoon; the formless given form; signification so utterly and minutely fragmented and dispersed that it becomes slime.