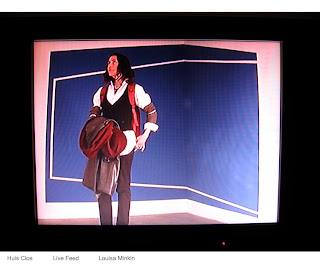 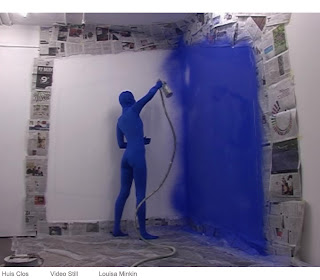 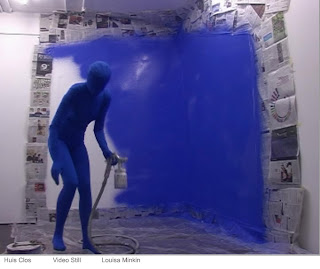 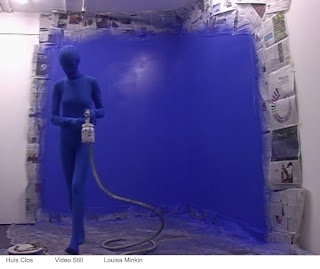 
The actions of the blue figure are the opposite of camouflage, rather than adapt to its background , it alters its background in order to naturalise itself. The blue screen suit confers upon its wearer the absurd possibility of invisibility, like the Ring of Gyges or the mythical properties of the Heliotrope stone. In masking the identity of the wearer, it makes them alien: estranged. Like the Sorcerer’s Apprentice the figure is condemned to repeat the action over and over, painting itself out of the picture.

What is left by this process? A blue screen, folded into the corner; a screen within a screen, demarking a space for the viewer: a ground or planar organisation staging the viewer into actor or model. The blue screen offers the possibility of keying in one’s own background, a metaphoric elsewhere; a space within a space.

The live feed synthesises real, extensive space into a flat representation. Time passes and the light moves over the painting. People move through the space, the gesture and the gaze become heightened, frozen within the frame.

In this instance the gallery space becomes a means for the production of work. Reception becomes production. The space at Five Years operates as a vestibule, antechamber, a passageway through to the studios, interface between practice and public. It is a waiting room.

Huis Clos is the title of a Sartre play.
It is translated as Dead End, No Exit and also as In Camera.
Posted by five years at 6:47 PM